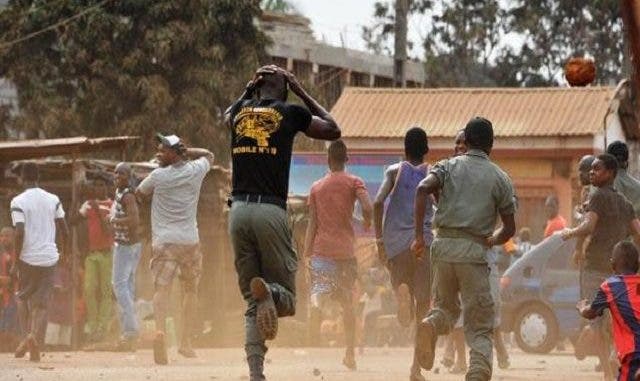 A middle-aged man known as Lukman Omoola has been killed.

A building inside the Akinrun palace has also been set ablaze.

This reportedly occurred today when some traditionalists allegedly led by the police and Amotekun operatives wanted to force their way into the palace in an attempt to lead the new Akinrun, Oba Yinusa Olalekan Akadiri inside the palace.
Read Also BREAKING: Protest In Ikirun Over Moves By Osun Govt To Announce New Akinrun (Video)

It was gathered that the traditionalists, police and Amotekun operatives were resisted by some youths who have been protesting against Akadiri’s appointment ever since he was announced.

The palace had been inaccessible for Oba Akadiri, as it was barricaded with iron bar. The palace entrance had also been adorned with spiritual objects.
Read Also Akinrun Stool Crisis: Governor Oyetola Presents Staff Of Office To New Akirun In Abere
Akinrun Stool Crisis: Court Remands Nine For Allegedly Shooting Five Persons During Protest In Osun
It was gathered that the police and Amotekun operatives were shooting sporadically when they stormed the palace entrance.

Omoola, one of the protesters, who was hit by the bullet, died instantly.
Read Also Confusion In Osun As New Akinrun Barred From Palace
Ikirun Development Vanguard Calls For Fair, Transparent Selection Of Akinrun Of Ikirun
When contacted, the Police Public Relations Officer, Osun Command, Mrs Yemisi Opalola, said she was yet to receive briefing on the matter.