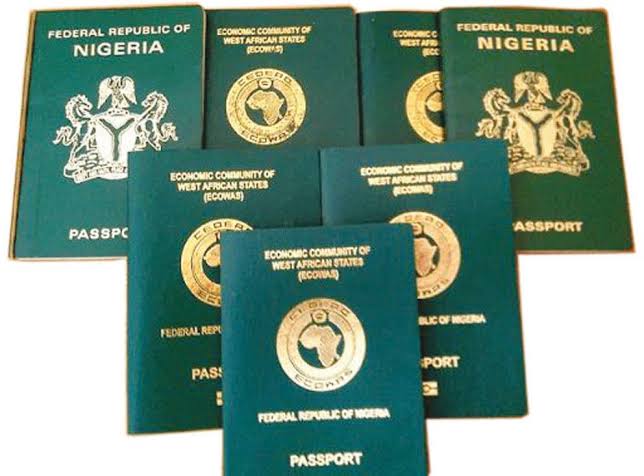 The Nigeria Immigration Service (NIS) has announced that more than 5,000 passport booklets have been produced and ready for collection from its weekend passport production operation.

The milestone is sequel to the directive by the Comptroller General of Immigration, Isa Jere Idris, to Passport Offices and Diaspora desks at international airports to open on Saturdays to clear applications backlog.

Under a special arrangement to ramp up passport production, Passport Offices from December 3, 2022 to January 28, 2023, open between 10am to 2pm to speed up passport production in furtherance of steps by the Federal Ministry of Interior and NIS to clear the backlog of applications for the issuance of the enhanced Nigerian international e-Passports.
Read Also Kizz Daniel Hits 500 Million Streams, Receives Award Of Gold Plaque
Osun Debt Profile: Adeleke’s Report Is Accurate, Oyetola Was Not Sincere – Kolapo Alimi
The special weekend service for instance saw the flagship Ikoyi Passport Office processed 800 booklets last Saturday alone, while other Passport Offices across the country have also delivered appreciable numbers of booklets.

Public Relations Officer of the NIS, Anthony Akuneme, said in addition to the Saturday operation at the Passport Offices, the CGI also approved the deployment of passport controllers to Ondo and Ekiti states to enhance service delivery to clients in those states.

While clarifying that the Passport Offices would not open only on the Saturdays preceding the Christmas and New Year holidays, he reiterated that the Federal Government was committed to doing everything possible to make passport services available and stress-free to the travelling public, especially during the festive season.
Read Also Oluwo Lauds Governor Adeleke For Interacting With Monarchs, Promising Local Govt. Autonomy
Christmas: Prophet Omikunle Distributes Rice, Cash, Other Items To Mountain Of Calvary Members
Meanwhile, the Service has expressed displeasure that many applicants whose passports have been processed have not been collecting them, noting that there are over 30,000 passports nationwide that have not been collected by applicants.

Akuneme, therefore, appealed to the concerned applicants to proceed to the passport offices which they indicated in their application forms and did their biometrics capturing to go and pick up their passports, without any further delay.

He also urged passport applicants to always provide their correct details including active telephone numbers and email addresses as these will make it easy for the Immigration Service to reach them whenever the need arises.

‘‘The failure of some applicants to supply functional telephone numbers and email addresses in their applications poses a challenge for our officers to contact them whenever the need arises. In fact, it is one of the major reasons that we have the high number of unclaimed passports.

Read Also Why DSS Withdrew Personnel From Governor Adeleke
Enhanced e-Passport: Aregbesola Moves Nigeria To Number 1 In Africa And 5th In The World
“The Ministry of Interior and the Nigeria Immigration have been working assiduously to make the process of obtaining the Nigerian international passports easier and stress-free, and this gesture must be reciprocated by applicants coming forward to collect their processed passports,’’ he said.

OSUN DEFENDER recalls that the Ministry of Interior and NIS, in continuation of the implementation of passport administration and immigration service reforms, recently launched a series of proactive measures to address the concerns of Nigerians living abroad whose passports have expired, and willing to come home.

Among the measures is the setting up of a special fast-rack service that enables Nigerians with expired passports living in foreign countries to return home without any hindrance at all ports of entry.

The NIS also set up dedicated Diaspora Desks at all international airports across the country to give priority attention to the returnees and their families to renew their expired international passports within 2 weeks as well as access other immigration services.
Read Also FG Launches Enhanced Passport In Canada
No Passport Booklet Shortage Again In Nigeria – Aregbesola
CGI Idris in furtherance of the series of measures also wrote to the Nigerian Foreign Missions, Immigration Attaches, Airport Comptrollers, and local and international airline operators to allow holders of expired Nigerian international passports to board at their respective countries of residence as well as allow them entry into Nigeria without any inhibition.